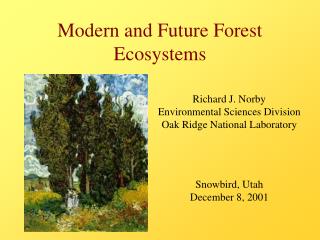 Valuing the Non-Timber Benefits of Forests in a Changing Climate - . presentation to the inff conference november 5 th ,

Iroquois Ridge HighSchool - . welcome to the “class of 2018 ”. reasons to be excited about “the ridge”. new

Florida Forest Economist - . what are the economic benefits of this ecosystem to a home owner?. they could use wood to

Forest and wildlife resources - . a forest is best defined as an ecosystem  or assemblage of ecosystems dominated by

Importance of Forestry - . ag-fs-2. the student evaluates humans needs and demonstrates the role of forestry in meeting

The Portfolio Project: Growing Writers for the Future - . presented by alex witkowski , teacher of english and april

The Boreal Forest (Taiga) - . by: dina sawan and dana mahmoud class: 6a . http://www.answers.com/topic/boreal. the

Freshwater Ecosystems - . the types of organisms in an aquatic ecosystem are mainly determined by the water’s salinity