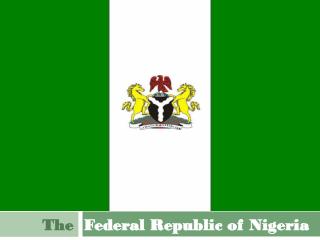 Nigeria. The Federal Republic of Nigeria. The Nigerian States. Nigeria at a glance…. Geographic Influences. Northwest – dominated by two groups that combined as the: Hausa-Fulani people, area is predominantly Muslim . Est. the Sokoto Caliphate state Nigeria - . why study nigeria?. nigeria is a megastate its importance is derived from its large population, oil reserves,

Nigeria - . a microcosm of everything wrong with the world today. most populous nation in africa (140 million) gdp per

Nigeria - . by breann lehr , and dajsa deuel. location. western africa, bordering the gulf of guinea, between benin and

Nigeria - . ayoub , logan, seth, rebekah. gdp. the gdp of nigeria has risen significantly since 2000, more than

NIGERIA - “ nigeria is not a nation. it is a mere geographical expression. ” --chief obafemi awolow. nigeria. part 1:

Nigeria - . genesis. and the wife of the colonial governor said, “let’s name it after the niger river” and it was

Nigeria - Diversity and stereotypes. nigeria. facts about nigeria. how many languages have been spoken in nigeria over