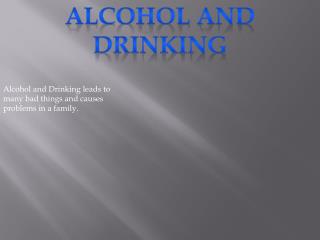 Alcohol and Drinking. Alcohol and Drinking leads to many bad things and causes problems in a family. Alcohol use health consequences are considerable; prevention efforts are needed, particularly for Adolescents and college students. The national minimum legal drinking age of

Binge Drinking and Blood Alcohol Level - . arts academy at benjamin rush this power point was downloaded 11/2010. it was

ALL about alcohol and safe drinking - . what is alcohol?. alcohol is a drug that you can drink. the drug makes your body

The Types of Drinking Alcohol