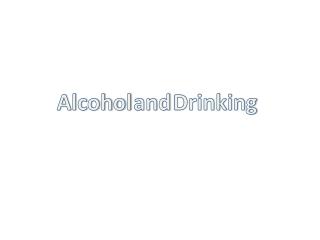 Alcohol and Drinking. T hesis. The negative affects of alcohol and drinking are breast cancer, colorectal cancer, cirrhosis. Alcohol is an organic solvent, which in high doses has both direct and indirect harmful influence on a large number of Alcohol and Drinking - . alcohol and drinking leads to many bad things and causes problems in a family. alcohol use

Alcohol Addiction and Binge Drinking - For teenagers, alcohol is not less than a drug that devastates their rest of the

ALL about alcohol and safe drinking - . what is alcohol?. alcohol is a drug that you can drink. the drug makes your body

Binge Drinking and Blood Alcohol Level - . arts academy at benjamin rush this power point was downloaded 11/2010. it was

The Types of Drinking Alcohol

Wazifa To Stop Drinking Alcohol - Or for alcoholic husband can be use to leave alcohol. just use our wazifa for alcohol

Mantra To Stop Drinking Alcohol - Or to remove alcohol addiction can be use for husband to leave drinking. for quick