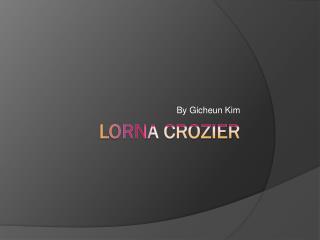 By Gicheun Kim. Lorna Crozier. Lorna Crozier’s Life. Lorna Crozier was born in 1948 in Swift Current, Saskatchewan. Crozier taught English in high school Crozier published 15 books of poetry She was the writer-in-residence at many universities. Lorna Vanderhaeghe Active Collagen - Over one-quarter of all the protein in the body is made up of collagen. collagen is

ARTHUR B. CROZIER FEBRUARY 5, 2008 - . are you prepared for the new age of hostile and activist shareholders?. hedge fund

Photoshop Lorna Moloney 30 Nov 2013 - . what can it do?. powerful software for creating, editing, manipulating and

Planning for the Interdisciplinary Project by Lorna Grant - . aims of the baccalaureate. raise the status and value of s6