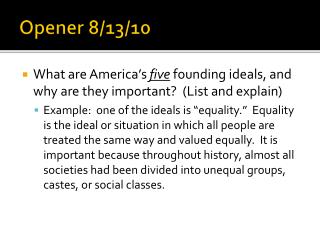 Opener 8/13/10. What are America’s five founding ideals, and why are they important? (List and explain)

Things You Need: Packet from the front of the room Notebook paper Test Analysis Chart and Graph - Opener/agenda if you

Data Analysis and Presentation - . chapter 5- calibration methods and quality assurance excel – how to do 1- least

Remixing web data for your hacks the easy way - . yql – the can opener of the web. hacking together systems in 24 hours

Opener - . king louis the xiv was nicknamed the sun king. how does this nickname relate to a huge palace like versailles

Opening Agenda - . things to get: textbook: adventures in the human spirit handout from the front of the table things to

Opener for November 11: - . copy down the agenda in your agenda book, please. if you still have portions of your project

Opening Agenda - . turn in becoming cultured! things to get: one paper off the table in the front of the room three

Demographics - . 1/6/13. opener: what do you know about the world based on the information on the site? what is your

Involuntary Exposure Protecting Children from Secondhand Smoke - . opener. what do you hope to learn from this session?