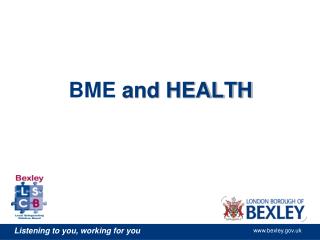 BME and HEALTH. Objectives. To bring to light the issue of ‘Female Genital Mutilation’ - FGM To understand the implications of this act on the health of BME children. To explore how professionals can help safeguard these children. OUTLINE. Introduction Definition of ‘FGM’

Quality of public space, well-being and health in BME communities - . dr edward hobson head of research and futures. the

National Clinical/Biomedical Engineering Appreciation Week at MGH May, 2013 - . back to home

What is Biomedical Engineering?

BME - . biomedical engineering. the career of the future. what is bme. new career discipline merges skills of engineering

OUR HEALTH, OUR ACTION - . tandrusti research findings iram naz (wea project researcher). why we did the research?.

Health and Disease - . ocr as biology unit 2 module 2: food and health. learning outcomes. discuss what is meant by the