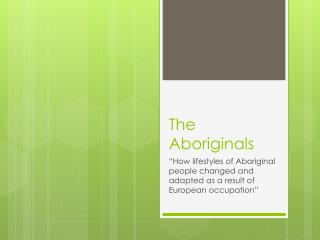 The Aboriginals. “How lifestyles of Aboriginal people changed and adapted as a result of European occupation”. Pre European-Occupation. Before European Occupation.

The Aborigines of Australia - . who are the aborigines?. the term aborigines refers to the indigenous (native) people of

Aboriginal Polices - . protection: 1890s - 1920. what is it? protection policies were introduced to spare aboriginal

GOOD MORNING 3K VENUS - . my news topic for this week is: aboriginal people before colonisation. how &amp; where did

The Australian Aboriginals - . the oldest living culture. objectives and goals. identify the origin of the australian

ABORIGINAL SURVIVAL IN AUSTRALIA - . woomera &amp; spear. the woomera is a sort of cradle for the spear and can

Australian effect on the aboriginal life styles - . by: nour ahmed 8b. before colonization

The Aborigines of Australia - . a presentation by sandra and luisa. overview. the relationship between euopeans and

Sacred Aboriginal Sites/Areas - . what is a sacred site?. aboriginal people have a strong connection to the land. they

Australian Aborigines - . their art and culture. some will be able to give an historic account of the aborigines and