THE WAR TO SAVE THE UNION - PowerPoint PPT Presentation 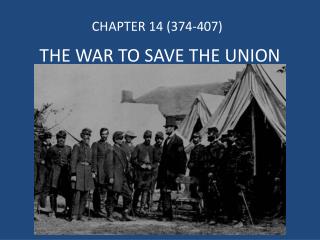 THE WAR TO SAVE THE UNION THE WAR TO SAVE THE UNION. CHAPTER 14 (374-407). LINCOLN’S CABINET . Many feared that Lincoln would not be up to the task – his few speeches seemed to only aggravate this feeling – as did his preoccupation with his cabinet He appointed a “balanced” cabinet

THE WAR TO SAVE THE UNION

Road to the Civil War - . ms. ramos alta loma high school. can the north &amp; the south discuss the status of the

The Civil War - . review: how’d we get here? from compromise to crisis. southern secession. for many southerners, the

Political Leaders of the Civil War - . abraham lincoln. president of the united states during the civil war against

III. The Civil War and Reconstruction - . true the majority of the american people in the middle of the 19 th century did

THE UNION IN PERIL: CAUSES OF THE CIVIL WAR CHAPTER 10 - . section 4 slavery and secession why did the south secede?.

The Civil War and Reconstruction - . usi.37 on a map of north america, identify union and confederate states at the

Mr. Kubeny’s Million Dollar Pre$entation - . what are some frequently asked questions about $?. 1. when should i save?