THE ANT AND THE CRICKET - PowerPoint PPT Presentation 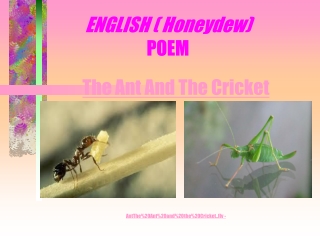 THE ANT AND THE CRICKET It is the poem about 'The Ant and the Cricket' in Class 8th.

THE ANT AND THE CRICKET

The Ant colony quiz - . there are lots of questions here about all the different types of ants in a colony. you just need

THE ANT PHILOSOPHY - . 1 st part philosophy. ants never quit if they’re headed somewhere and you try to stop them,

The grasshopper and the ant - . an aesop’s fable retold by sclb, 2009. once upon a time, a grasshopper was hopping in

The Ant - Or. the ant. a fable... or. may be not. every day, a small ant arrives at work very early and starts work

The ant and the dove - . an ant went to a fountain for a drink of water. she tumbled in and almost drowned. a dove,

Grasshopper And The Ant - By:. grasshopper and the ant

The Ant and the Grasshopper - . answer the questions. who are the characters in the story?. the grasshopper - hop. the a

Clyde the Cricket - “it’s not summer until the cricket sings.”. clyde the cricket. “a tale of a true american

The Life and Times of the Ant - . vocabulary words . solitary – adjective – living, being, or going alone the

The cricket hypothesis - . by the scientists (aka mason steiner and micah canales ). purpose. the purpose for this

THE ANT AND THE GRASSHOPPER - . p rose/fable with cd page 312 to 315. prose. ordinary form of spoken and written language

The Ant and the Dove - . an ant was playing on the tree near the river bank. he fell down in the water. the water rushed

THE ANT AND THE CRICKET - . aesop's fables. kavita tgt english. about

The Ant - Or. the ant. a fable... or. may be not. every day, a small ant arrives at work very early and starts work

Sam the Ant - . by eleanor mcdavid. i am sam and i am an ant. i live in an ant hill. there are lots of us in the hill. we