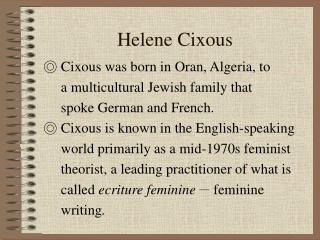 Helene Cixous. ◎ Cixous was born in Oran, Algeria, to a multicultural Jewish family that spoke German and French. ◎ Cixous is known in the English-speaking world primarily as a mid-1970s feminist theorist, a leading practitioner of what is Elizabeth Laird &amp; Helene Stebbins - P-20 longitudinal data systems what is the information we need, how do we get

Empowerment and Self-Confidence Process by Helene Goldnadel - At international creative artists, the post-secondary

Algeria currency - . algeria’s currency is the algeria dinar. they use to call their money franc but now it is called

An English-Speaking World - . by don l. f. nilsen and alleen pace nilsen. “standard english may be the standard by

Carnival in German speaking countries - . (or when the germans go a little crazy!!). what is carnival? . the carnival

Christmas in the German speaking countries

Multicultural Folklore - . pros and cons. benefits of sharing folklore:. folklore is the basis for much literature