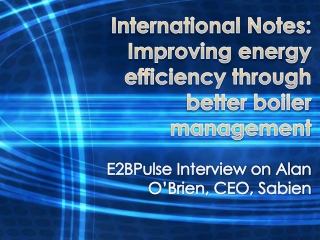 Alan has held a number of senior marketing management and commercial roles within the UK Energy and Telecom sectors including positions with TXU, KDDI, Eircom and Irish Life Plc.

LAW ON EFFICIENT USE OF ENERGY - Republic of serbia         ministry of energy, development and environment а l

Power Electronics for Renewable Energy, Smart Grids - . - chunyan an -pooja shah. what are smart grids? why do we need

Energy Savings Through Energy Efficiency - Efficient power generation 2011 roundtable 4: efficient use of energy in the