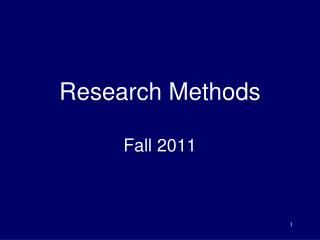 Secondary English Methods ~ Fall 2011 - . be thinking…who are you?. name experience why are you a teacher?. master of

Research Methods Dr. Joe Saviak Fall 2010 - Gun ownership as a risk factor for homicide in the home a rthur l.

Fall 2011 - . tpa introduction. what is tpa?. a teaching performance assessment is an assessment that requires candidates

Research Methods and Methods for Research - . there are a large variety of tools of interest for national security and

Research Methods - . howell istance department of computer science de montfort university. this session…. why do you