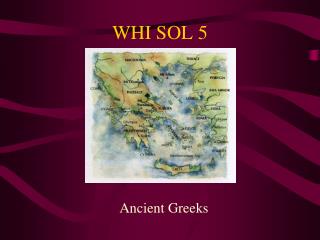 WHI SOL 5. Ancient Greeks. The physical geography of the Aegean Basin shaped the economic, social, and political development of Greek civilization. The expansion of Greek civilization through trade and colonization led to the spread of Hellenic culture across the Mediterranean and Black seas.