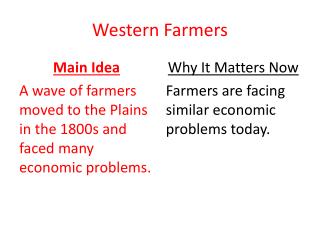 Western Farmers. Main Idea A wave of farmers moved to the Plains in the 1800s and faced many economic problems. Why It Matters Now Farmers are facing similar economic problems today. CA Standards.

Fifteen basic statements on the conflict of Western Sahara - The western sahara in the light of the international law :

Taking Hybrid Pigeonpea to the Doorsteps of Farmers - . supported by national food security mission of india.

THE POPULIST MOVEMENT - . the plight of the farmers 1870s-1880s. farmers were becoming a minority in the usa. the numbers

Imperialism - . essential questions: how did people in africa and asia respond to western imperialism? how did

Scarecrows - . the history of scarecrows. hungry birds have always been a problem for farmers.  sometimes the birds ate

Welcome to - . who wants to be a marketer?. created for marketing , 7th ed., by lamb, hair and mcdaniel

Sitting Bull, great chief of Sioux nation. - Changes on the western frontier. the culture of the plains indians declines