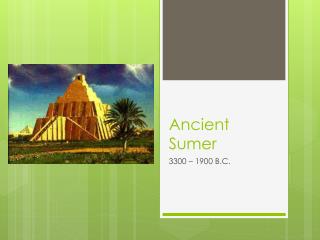 Ancient Sumer. 3300 – 1900 B.C. Fertile Crescent. Today…. Mesopotamia. Land “between the rivers” Literally: Tigris & Euphrates Why was this a good place to settle? What did the Sumerians have to get really good at?. Sumerian Society. Organized into city-states Ancient Sumer - . discovery. ‘tells’ are found in the desert of iraq even after their discovery, sumer is still

Ancient Sumer and Empire Builders - . the fertile crescent. first known civilization in area, mesopotamia, “between the

City-States of Ancient Sumer - . the fertile crescent. the area that curves from the persian gulf to the eastern

Sumer - . mesopotamia was located in what is now the country of

Sumer - . find out more about ancient sumer visit the main museum website www.britishmuseum.org use explore to look at