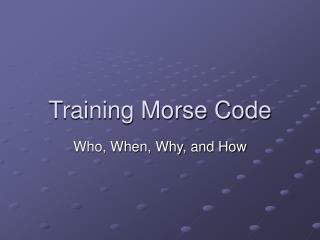 Life without these ? NO WAY !! - . a brief look at innovations during and shortly before the 2 nd industrial revolution

For hard-core music lovers, the Zune’s a gem. It blows the iPod off the map in music discovery and downloading. - For

The Birth of Photography - . - niepce ( heliographs ). in america. john lock samuel f. b morse the telegraph . what do

Samuel F. B. Morse - . by taitianna moultry . the early years . morse was born in charlestown, massachusetts, on april

From Morse Code to Gigabit Ethernet - . lisa marvel us army research laboratory. information presented here is, for the

The Eyak Corporation &amp; Subsidiaries’ Ethics Training 2013 - . overview. purpose of the code of ethics (code) is