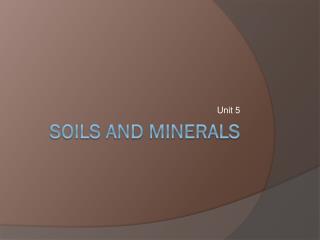 Unit 5. Soils and Minerals. What is soil?. Relatively thin surface layer of the Earth’s crust Consists of mineral and organic matter that has been modified by natural actions of agents such as weather, wind, water, and organisms Minerals, Rocks, and Soils - . what is a rock? why is gold so expensive compared to iron? why do plants grow in some

Unit 2- Minerals, Rocks, Soils and Weathering - . identifying minerals. how are minerals identified?. minerals can be

SOILS AND THE - . soil-atmosphere. interface. temperature change resulting from q g depends on: amount of heat

Soils and Regolith - . pedology- the study of soils. pedogenic processes depend on: clorpth climate - temperature, h

Media and Soils - . chapter 6. learning targets. i can identify various types of growing media? i can explain the

Soils and Foundations - . foundation loads. a foundation supports a number of different kinds of loads: dead load – of

Subsidence and Soils - . chapter 8. learning objectives. know what a soil is and the processes that form and maintain

Rocks and Soils - . rock types. the earth’s crust has many different types of rocks. these rocks are usually

Soils and Biomes - . outline. turn in your permission forms for the interview. pay attention to the timer – it let