What is Genocide? - PowerPoint PPT Presentation 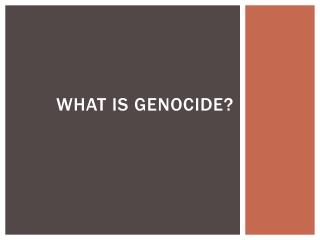 What is Genocide?. Definition of Genocide. Geno – race Cide – killing Genocide – acts committed with the intent to destroy in whole, or in part, a national, ethnic, racial, or religious group. (This definition was created by the United Nations in 1948). Where have genocides occurred?.

Genocide -   ‘genocide is the deliberate extermination of a racial, religious or ethnic group’ (chambers

GENOCIDE - . the 8 stages. what is genocide?. genocide is the deliberate killing of a large group of people, esp. those

African Genocide - . rwanda &amp; darfur. african genocide. genocide is not unique to africa but is a problem that

What is Genocide? - . definition of genocide. geno – race cide – killing genocide – acts committed with the

Genocide - . never again: genocide after the holocaust. genocide. t he systematic killing of all the people from a

GENOCIDE - . compare and contrast different definitions of genocide . work individually at first and read through the

Genocide Research Assignment - . what is genocide?. according to international law there are 2 parts… 1) the mental

African Genocide - . case study of sudan. do now. using any background knowledge you have answer the questions on the

Genocide - . list all situations you can think of that might be categorized as genocides. genocide: the deliberate

Genocide - . a ny of the following acts committed with intent to destroy, in whole or in part, a national, ethnic, racial

Genocide - . genocide- the deliberate systematic destruction, in whole or in part, of an ethnic, racial, religious or

Genocide - . genocide. the organized, systematic destruction of an identifiable group. genocide “: the systematic

What is Genocide? - . genocide : is any act that is intended to destroy, in whole or part, a national, ethnic, racial or

Genocide - . [ jen -uh- sahyd ] noun- systematic killing of a racial or cultural group. genocide is defined as…. the