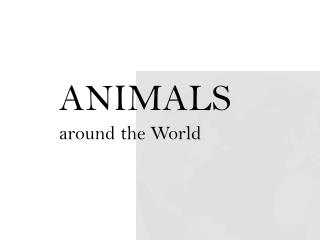 ANIMALS around the World ANIMALS around the World. African Elephant. Loxodonta africana. World’s largest land mammal Tusks are present at birth, but the “baby tusks” fall out after a year, and permanent ones replace them The large surface area of their ears help radiate excess heat under the harsh African sun

ANIMALS around the World

SAVE ANIMALS - Sustainable livinig save earth presented by surekha patil p.b.h.s. save animals. tiger – the national

A few of the unsung wonders of the animal world - . lobanova lera veltz andrey.

African Animals! - . by: megan. contents. habitats and the animals that live

Unit 2: Animals - . cubs – a word for some baby animals. unit 2: animals. food – what people and animals eat to live.