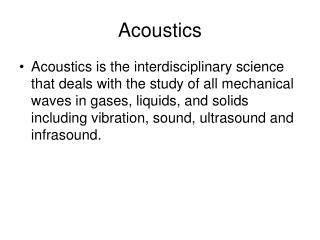 Acoustics. Acoustics is the interdisciplinary science that deals with the study of all mechanical waves in gases, liquids, and solids including vibration, sound, ultrasound and infrasound. Acoustics.

Room Acoustics 室内声学 - . room acoustics is concerned with the control of sound within an enclosed space . the

Room Acoustics - . bouncing around october 26, 2007. music and other sounds. come from a source. the source is not

Room Acoustics - . bouncing around. experiment. listen to a tone and move your head from side to side. what do you hear?

Wolfgang Kohler - . the foundations of gesaltism. introduction to kohler. kohler was born in estonia, and earned his ph.d