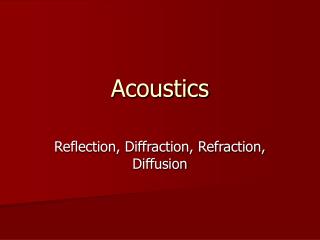 Acoustics. Reflection, Diffraction, Refraction, Diffusion. Reflection of Sound. If a sound is activated in a room, sound travels radially in all directions. As the sound waves encounter obstacles or surfaces, such as walls, their direction of travel is changed, i.e., they are reflected.

Transitions + Perception - . march 27, 2012. tidbits. first: guidelines for the final project report so far, i have two

Sound and Speech Recognition - . what is sound ?. acoustics is the study of sound. physical - sound as a disturbance in

Noise 101: Introduction to Acoustics and Aircraft Noise Terminology - . “the shot heard round the world”. chris

Audio Acoustics in Small Rooms - . by earl r. geddes gedlee llc www.gedlee.com. my background. my phd. thesis was on the