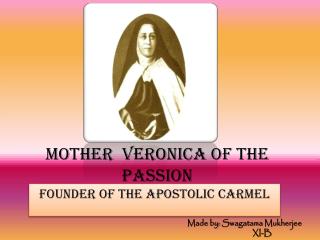 Mother Veronica of the passion Mother Veronica of the passion

PASSION v/s PAY Which one is you? - Sometimes it becomes difficult to decide whether to go with life passion or

Whose Mother Am I ? - . jonathan and daniel r. whose mother am i?. i eat birds, frogs and lizards. i am a reptile. i am

Being a Mother! - . somebody said it takes about six weeks to get back to normal after you’ve had a baby that somebody

What Is Your Passion? - . let’s watch a video about people’s passions. homework: find your passion!. young authors

Luke: third lecture – the passion - . “father, into your hands. luke’s passion. in general luke (like matthew)

Being a Mother! - . somebody said it takes about six weeks to get back to normal after you’ve had a baby that somebody

The Beatles - . by veronica whittaker. biography. paul mccartney . born in liverpool on june 18 th 1942 displayed a

Youth Ideas - Mother’s Prayer for Her Children - Susannah wesley, the mother of charles and john wesley is a vivid

A Mother s Influence - Being a mother. not a walk in the parkproverbs 31:28, her children arise and call her

Whose Mother Am I? - . by brianna mendez and daniel reyes. whose mother am i?. i live in the tropical rainforest. i am

Mother's Day Gift Inspiration - Mother is important in every family. she is caring everyone in the family. so in this

MARY MOTHER OF JESUS, MOTHER OF GOD - . part iic: mary’s motherhood. “who am i that the mother of my lord should come