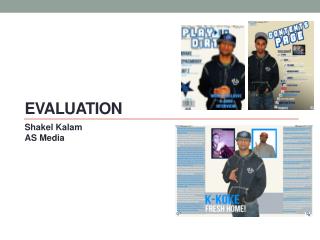 Evaluation. Shakel Kalam AS Media. In what ways does your media product use, develop or challenge forms and conventions of real media products?.

Assessment, Feedback and Evaluation - . vinod patel &amp; john morrissey. learning outcomes. by the end of this