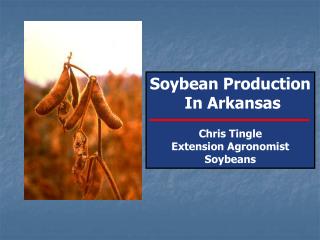 Soybean Production In Arkansas Chris Tingle Extension Agronomist Soybeans. First planted in the United States in 1765. Primarily grown as a forage crop. Around 1910 the benefits of soybean oil & soybean meal were recognized. Soybean acreage increased throughout Careers In Agronomist - In coronary stents

Agronomist - Jake baloun. agronomist. an agronomist’s jobs. study plants in the field do research on the plants in a

Amazing Benefits of Soybeans And What is Soybean Commodity - Soybean commodity keeps growing all over the world. there is

Agronomist Job - . by: caleb aufdenberg. job description. agronomy is a science and a practice that looks at agriculture

Basics of Soybean Production for Maine

Soybeans Grow in Rows - . an introduction to soybeans. where did this photo come from?. is there a soybean field close to