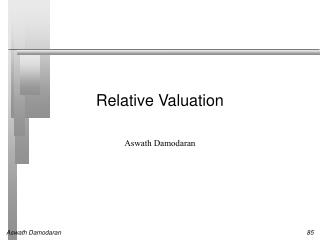 Relative Valuation. Aswath Damodaran. Why relative valuation?. “If you think I’m crazy, you should see the guy who lives across the hall” Jerry Seinfeld talking about Kramer in a Seinfeld episode. “ A little inaccuracy sometimes saves tons of explanation” H.H. Munro.

Relative Valuation - . aswath damodaran. why relative valuation?. “if you think i’m crazy, you should see the guy who

Using Multiples for Valuation - . why use multiples?. a careful multiples analysis—comparing a company’s multiples

Applying Relative, Asset Oriented, and Real Option Valuation Methods to Mergers and Acquisitions - . you earn a living by

Multiple Based Valuation, I - . alexander motola, cfa. what is “valuation”?. it is not the stock price it is not the

Relative Valuation - . valuing a company relative to another company. relative vs. fundamental valuation. the dcf (wacc,