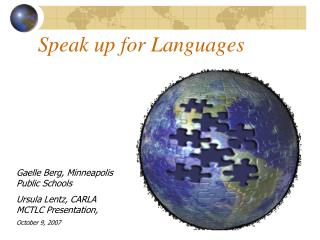 SPEAK UP FOR AG - August 1 , 2013. speak up for ag. sharing your pride for texas agriculture. texas proud. pride in doing

Speak Up - . math unit 9 review. fill in the blank. 1- you can collect data by asking people the same question in a

Speak Up - . dave sears. need to belong. pride learn new leadership and skills be part of an effective team delegate and

SPEAK UP! - . responding to everyday

SPEAK UP - . when we are tempted to look away or even join in…. ‘we must always take sides. neutrality helps the

Speak Up! - . andrea johnson community representative aka “the blood lady” or “the goddess of bloodletting”.

Speak Up - . program. as a company we rely on our employees who are on the front line everyday to report any possible

power up! speak up! - . blackfen school public speaking competition. a competition for students in years 7 &amp; 8

Speak up for the NHS

Speak Up for HISPANIC HERITAGE - . hispanic heritage month is a national holiday in the usa. it is celebrated from

power up! speak up! - . blackfen school public speaking competition. a competition for students in years 7 &amp; 8

Speak Up Spectrum - . do you have an autistic spectrum condition? do you want to help other people with an autistic

Speak Up On Health - . welcome. speak up on health. programme marketplace agm: review of the year 2013/14 how the money

How Many Languages Does Bangalore Speak? - Sitting on a table with 40 other women on one gossip filled lunch session, i