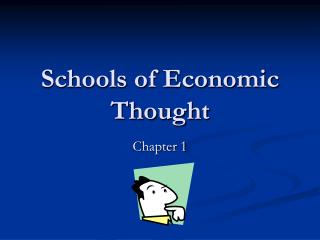 Schools of Economic Thought. Chapter 1. Introduction. The word "economics" is derived from oikonomikos , which means skilled in household management. Why? Modern economic thought emerged in the 17th and 18th centuries as the western world began its transformation from

Theories of Development - . ap human geography spring 2014. development theories. is the path to development a direct

CCSS: Have you thought of ???? - . mississippi association of secondary schools principals june, 2011. what are common

Political Thought - . mark knights. lecture plan. is the term political thought a useful one? what are the key themes of

Schools - Chapter title. 11. schools. “the whole art of teaching is only the art of awakening the natural curiosity of

VIRTUAL - . schools &amp; classrooms. question for thought:. is a progression toward virtual schools and classrooms a

Ancient and Medieval Economic Thought - . lecture 2. introduction. “where shall we start ...?” buchholz, 5-7 “the