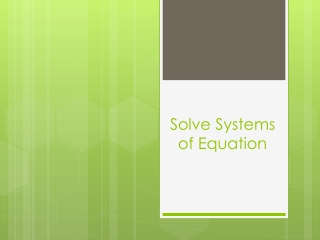 Solve Systems of Equation. A system of equations is a set of two or more equations that have variables in common.

Algebra 1 Section 3.4 Solve equations with variables on both sides of the equation. - Algebra 1 section 3.4 solve

3.3 Using the Properties Together - . goals: to solve equation by using the addition and multiplication properties to