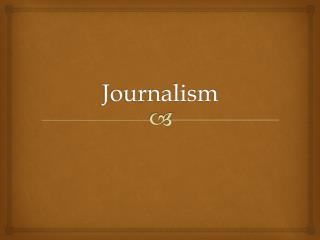 Journalism. The Job of a Journalist. In the career of journalism, there are many long hours & an unpredictable schedule As a journalist, there will be many tight deadlines and fact checking that you have to pull through with JOURNALISM - . gabby &amp; darian. what is it….?. reporting of a variety of events gathering of information through

Journalism - . textbook chapter 7 editing. 1. confusing affect with effect. remember that affect is usually a verb (the

Journalism - . what is it? why is it important? what does it have to do with yearbook?.

journalism - The community of fools, this is the place where we can all share publications! it's very

Journalism/ Newswriting - . 5 th hour ms. roller. my history- i have written for . the collegian college newspaper at csu

Yellow Journalism - . what is it…. william randolph hearst. joseph pulitzer ii. a term first coined during the famous