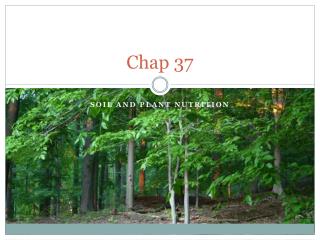 Chap 37 . Soil and plant nutrition. Fig. 37-1. Concept 37.1: Soil is a living, finite resource. Plants obtain most of their water and minerals from the upper layers of soil Living organisms play an important role in these soil layers This complex ecosystem is fragile. Soil Texture. Lecture 37 - . language review: sentences ii. in this lecture we will learn. lack of parallelism choppy sentences

Chap. 34 1933-1941 FDR and the Shadow of War - . objectives explain how the us turned away from its isolationist foreign

Ch. 37 Warm-Up - . what conclusions should we draw from van helmont’s experiment? where would you expect a deficiency

Chapter 37 ~ Community and Ecosystems - . where’s 3?. community structure. what is a community? community ~ an

A VisioN &amp; A CALL - . the book of ezekiel an introduction…. ezekiel: the book. contains some of the most vivid

Anesthetics - . lecture-2. elimination. the time to recovery from inhalation anesthesia depends on the rate of

Abdominal pain in the elderly Tintinalli Chap. 73 - . nicholas cardinal, do. epidemiology. 4.2% of ed visits by patients

MACROECONOMICS and the FINANCIAL SYSTEM - Chapter 17 securities markets. . in this chapter, you will learn:. the main

Chap-6: Friction - . frictional forces are unavoidable in our daily lives. pros and cons of friction. magnitude of the