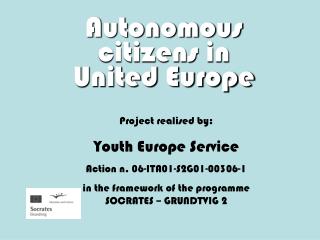 Autonomous citizens in United Europe. Project realised by: Youth Europe Service Action n. 06-ITA01-S2G01-00306-1 in the framework of the programme SOCRATES – GRUNDTVIG 2. Enlargement of the UE. 20 myths and facts about enlargement to abolish.

United Kingdom PPT - The united kingdom or the uk is a sovereign nation in north europe. britain is the biggest nation