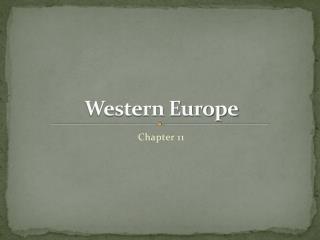 Western Europe. Chapter 11. The countries of Western Europe are united by cultural and political ties. The region is made up of countries that have democratic governments. This division dates back to the end of WWII, a war that involved nearly every country of Europe. Physical Environment.

Western Europe During the High Middle Ages 1000 to 1300 - . the cathedral of notre dame de paris, whose construction

The Foundation of Christian Society in Western Europe - . by basil kuriappuram, jack sheehan and troy mauriello. part one

Chapter 30: Western Europe in Transition - . 30-1: the renaissance and the reformation. pdn: make a concept map about the