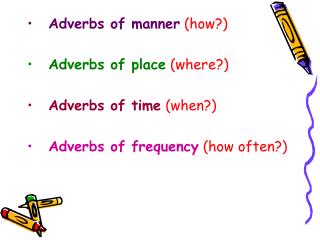 Adverbs of manner (how?) Adverbs of place (where?) Adverbs of time (when?) Adverbs of frequency (how often?). Compare 1) It is a fast car. He drives fast . 2) This is a hard exercise He works hard. How to identify an adverb 1. One-word adverbs ending in “ly” Good manner in class - . we should have proper postures in

Improve business productivity in efficient manner - Gps tracking device has become popular among people, and that is why

Adverb Rules - . adverbs are words that modify: . a verb (he drove slowly . — how did he drive?) an adjective (he drove

Adverbs - . grade seven. what are adverbs?. adverbs are single-word modifiers. this means that they describe something.

Adverbs - . all you want to know &amp; then some!. http://amerenglish.tripod.com amerenglish63@yahoo.com. adverbs.

Adverbs - . review and practice. adverbs. modifies a verb, and adjective, or another adverb . many adverbs end in “ ly

Adverbs - . what is an adverb?. an adverb is a word that describes a verb . adverbs give us information about action

Adverbs - . words which are used to modify verbs or adjectives are usually referred to as adverbs. for instance, the