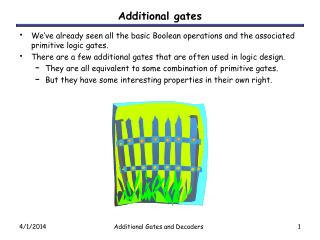 Additional gates. We’ve already seen all the basic Boolean operations and the associated primitive logic gates. There are a few additional gates that are often used in logic design. They are all equivalent to some combination of primitive gates. Gates - . a digital circuit is one in which only two logical values are present. typically, a signal between 0 and 0.5

Special Gates Combinational Logic Gates - . lecture 2. demorgan's law. converting and to or (with some help from not)

Gates Foundation - . make every one in the world healthy and fit . charity means to give willingly. an example of charity

BILL GATES - . done by: ahmed fandies. biography. bill gates was born on october 28 1955 in washington. bill gates is the

City Gates - . god’s people are to…. follow god’s law – love him above all – shema put god on display bring

Character Gates - Looking for doors and installation service? character gatemakers is a reliable name that serve you with

Logic Gates - . transistors as switches. eb voltage controls whether the transistor conducts in a common base