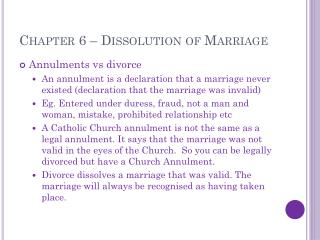 Chapter 6 – Dissolution of Marriage. Annulments vs divorce An annulment is a declaration that a marriage never existed (declaration that the marriage was invalid) Eg . Entered under duress, fraud, not a man and woman, mistake, prohibited relationship etc

Chapter 5 - . family problems. family. a kinship system of all relatives living together or recognized as a social unit,