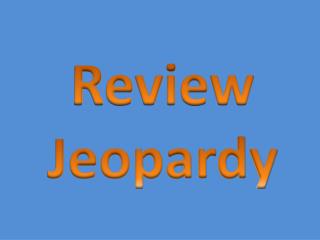 How to make this Jeopardy game work for your topic - . set up your teams and have them sit together. explain the ground

Semester 1 Review Jeopardy - . which law tells us that a fault or igneous intrusion is always younger than the rock

Invertebrate Review Game - . grab your clickers and get ready to play!!!. 1.which invertebrate phylum do these organisms

Jeopardy Review Game - . unit six – persuasion freshman. persuasive techniques 100. give me an example of bandwagon in

JEOPARDY - Road to the american revolution. jeopardy. contestants. don’t forget. …always phrase your answers in the