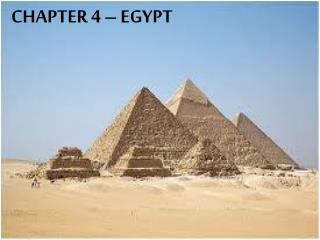 CHAPTER 4 – EGYPT. SECTION 1: GEOGRAPHY AND EARLY EGYPT. THE GIFT OF THE NILE. The existence of Egypt was based solely around the Nile, the world’s longest river. . Cataracts. Delta. The Nile carries water from central Africa through a vast stretch of dessert land. .

Nubia and Egypt - Chapter 3 lesson 3. nubia and egypt. add the following to your map of egypt using pages 82 and 93 of

Facts about Ancient Egypt - . by fiah taejah wiktoria. where is egypt?. egypt is in north east africa. farming in ancient

What Do You Know About Egypt? - . by: cindy wishon 2005. what is the name of the continent where egypt is located?. egypt