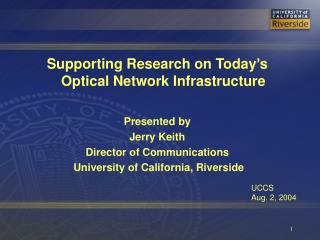 Supporting Research on Today’s Optical Network Infrastructure Presented by Jerry Keith Director of Communications University of California, Riverside. UCCS Aug. 2, 2004. The Story of the Trailer. The Call. The Visits. Another Call. Visit Again. New Information. What We Did. The Call.