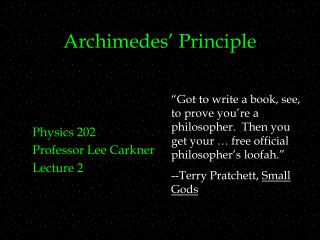 Archimedes’ Principle. Physics 202 Professor Lee Carkner Lecture 2. “Got to write a book, see, to prove you’re a philosopher. Then you get your … free official philosopher’s loofah.” --Terry Pratchett, Small Gods. PAL #1 Fluids. Column of water to produce 1 atm of pressure The Principle of Direct Syntactic Encoding: All grammatical relation changes are lexical - . two kinds of movement in

1. The Benefit Principle of Taxation 1.1 The Optimum Supply of Public Goods - Lecture “taxation economics” at state

THE RESTORATION PRINCIPLE - . “restore: to bring something back to an earlier and better condition”. the church

10-7 Buoyancy and Archimedes’ Principle - . this principle also works in the air; this is why hot-air and helium