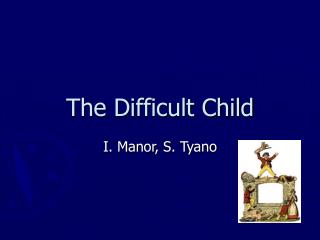 The Difficult Child. I. Manor, S. Tyano. What is a difficult child. A child who is difficult to live with It is a judgmental term It refers to a large spectrum of disorders, all with behavioral features . The disorders forming the syndrome. Separate or Additive. Mostly additive. Child Care, ADHD - The Difficult Child - You may have heard or read about certain foods that are good for your memory

The Difficult Airway - Objectives:. to be aware of the unique circumstances surrounding the emergency intubation.to be

Managing the Difficult Athlete - . responsibility. in any given situation as a leader, if you have a conflict, you are at

‘The Child’ - . a short story written by ali

Difficult Parents: - . and you thought the kids were the problem. lilly landikusic lmft, founder and director,

Difficult Conversations - . objectives. why we don’t like difficult conversations no action vs. action 3 steps to