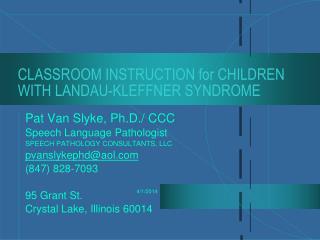 Children With Down Syndrome - . creed of babies with down syndrome. my face may be different but my feelings the

Classroom Interventions for Children with ADHD - Background. children with adhd receive medical attention to reduce the

Classroom Instruction - . ...name and define the specific events of instruction that would be included in your model of

Speech and Language Intervention for Children with Down Syndrome - Early intervention. research demonstrates the effects