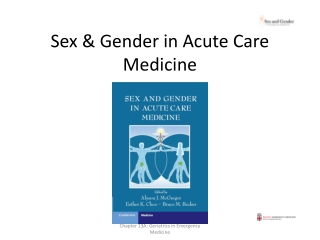 Sex & Gender in Acute Care Medicine. Chapter 13A: Geriatrics in Emergency Medicine A Gender-based Approach. Elena Kapilevich Bruce Becker. The Case of Mrs. V, Part I. Mrs. V is an 81-year-old woman who is brought to the ED by her daughter