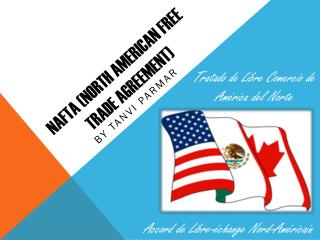 NAFTA (North American Free Trade Agreement). Tratado de Libre Comercio de América del Norte. By Tanvi Parmar. Accord de Libre-échange Nord-Américain. What IS NAFTA?. Definition: A trade agreement made between the governments of Mexico, Canada and the United States for the purpose of

NAFTA - . n orth a merican f ree t rade a greement. nafta or the north american free trade agreement was signed by the

NAFTA Class Presentation - . by théo le morvan 14 th of november 2012. contents. what is a trade bloc ? what is

NAFTA - . ss6e2 the student will give examples of how voluntary trade benefits buyers and sellers in latin america and

NAFTA - . by bianca conway and andy heckman. what is nafta?. nafta is the north american free trade agreement on dec. 17,

NAFTA and the G20 - . presentation by: aaron, connor, delainey , jacob, and laura . a brief

Chapter 16 - . nafta, gatt, wto: are trade agreements good for us?. chapter outline. the benefits of free trade why do we

NAFTA: North American Free Trade Agreement - . william breeman. what is nafta?. nafta is between the us, canada &amp;

U.S. – Canada Trade: Opportunities Through NAFTA and Beyond - . andrew i. rudman office of nafta &amp;