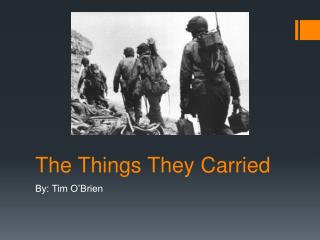 The Things They Carried. By: Tim O’Brien. Writing Prompt - Intro. YOU HAVE TWO JOBS: 1. Write down the questions, making corrections for capitalization and grammar as needed 2. Respond to the questions: you should be writing for at least 7 minutes QUESTIONS: PIGEONS By Robert Mangile - . http://mail.sumnercomm.net/~rmangile/pigeons/index.html. some things about myself. i love

Things to Consider When Developing an RTI Evaluation Plan - . national center on response to intervention. session

Living Things vs. Nonliving Things - . students will compare and contrast the difference between living and non living

A few things about the Optimizer - . thomas kyte http://asktom.oracle.com/. understanding access paths for the

Unit Four - . unit 4 attending fairs and exhibitions. 1. getting things ready. 2. 3. things to do. things to write.

Characteristics of Living Things - . what is biology?. biology is the study of life a biologist is someone who uses the

Chapter 5 - .  oxygenation assessments. oxygen transport review. oxygen is carried in the blood in two ways: as

On the Nature of Things - . atomism. all reality consists of minimal sized bits of matter– “atoms”—separated by

Blindsight - . you move about the world without bumping into things you see where things are and you can reach out and

Five Things about SQL and PL/SQL you might not have known about - . mick xu oracle university principal instructor