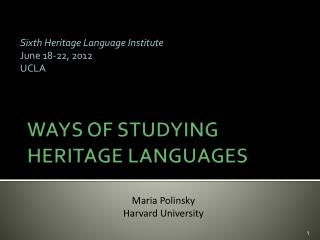 GIVING TO HERITAGE The Heritage Alliance - . the heritage alliance. the leading umbrella organisation for the independent

The dilemma experienced by students coming from Confucian Heritage Culture (CHC) when referencing - . presented by: moli

The Heritage Language Learner Survey: Focus on the Less-Commonly Taught Languages - A project of the national heritage

Why study Languages for GCSE? - . the importance of languages. how many languages are spoken throughout the world? 100

Cultures and Languages Across the Curriculum: - . responding to a national need 5-6 november 2005 university of iowa. dr.

Declarative Thinking, Declarative Practice - Presented at 8th light university london (13th may 2016) do this, do that.