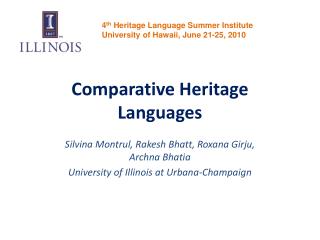 GIVING TO HERITAGE The Heritage Alliance - . the heritage alliance. the leading umbrella organisation for the independent

Heritage and Community Languages in higher education: Some Initiatives from Australia - . anne pauwels. australia as a

Rotsoord Industrial heritage - . stage 2: the group will be divided into small groups of three students each. each group

Comparative perspectives in the study of languages from the North-East of Congo Didier Demolin - Phonology laboratory,

Some general properties of languages 1. Synchronous vs. asynchronous languages (1) - . description of several processes

“Our Heritage” - Gymnasium № 248. “our heritage”. project done by the group of 7a-b form: abbasova elvira

The Heritage Language Learner Survey: Focus on the Less-Commonly Taught Languages - A project of the national heritage