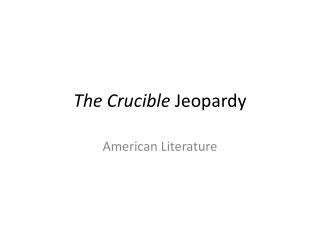 The Crucible &amp; McCarthyism - . the cold war in america. at the end of world war ii, the united states and the

The Crucible as an Allegory - . social climate. the climate in both cultures was burdened with petty politics and

Characters of the Crucible - . character

The Crucible: Act 1 - . short answer question : act 1. what reasons does john proctor have for no longer attending

Watson: The Jeopardy! Machine - . robin sturm. who is watson?. this is watson! (his “face” at least). this is also

Macromolecules Jeopardy! - . choose your question. final. click a dollar amount to choose a question. back. final