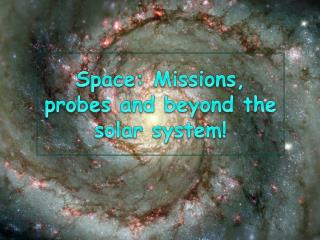 Space: Missions, probes and beyond the solar system!

Space: Missions, probes and beyond the solar system!. New Horizons. New Horizons is a spacecraft. Will pass within 10,000km of Pluto and 27,000km of Charon. Speed freak with the record for the fastest-ever launch. A size of a grand piano.

Space: Missions, probes and beyond the solar system!

Beyond Our Solar System - . what is out there??. our eyes to the skies .. hubble telescope. captured light telescope.

WORLD GEOGRAPHY Chapter 2 Section 1 The Earth Our Solar System - . our solar system. the sun, a star, is the center of

Space Exploration - . a space community. if you could take a space trip, where would you go? what would you see? what

Our Amazing Solar System - . sun our brightest star. approximately one million earths can fit inside the sun. the center

SPACE EXPLORATION - . reaching beyond the sky. the beginnings of an idea. early space exploration ideas were influenced

SPACE PENETRATORS FOR SOLAR SYSTEM EXPLORATION - . igone urdampilleta. 29 may 2014, ucm, madrid. contents . what is a

Touring our Solar System - . an overview of our planets. terrestrial planets are small and rocky mercury, venus, earth,