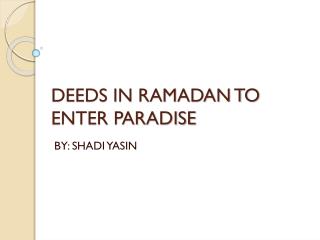 Enter a World of Paradise - . you won’t regret it. call to make a reservation:

Deeds - . real estate i mike brigner, j.d. some basic questions. what is the difference between title to property

Fasting In Ramadan - This presentation is presented by umrah expert. that understand the desires of their customers and

Ramadan - . ramadan is derived from the arabic root “ramida” or “arramad” which means intense scorching, heat and

Ramadan - . 9 th month of the muslim calendar (sha’aban). the month of ramadan is marked by the sighting of the new

Ramadan - . for islamic people all around the world this is…. a time for reading the qu’ran. a time for prayer. a

Ramadan - . fasting. ramadan appears to be in the 9th month of the lunar calendar, in which the muslims fast for either

Ramadan - . by joanne !!!. why is ramadan special ?. it is special to the muslim people because only when they look at

Ramadan - . transformationalsafety.com considers it respectful to have an underasytking of the cultures in which we

Ramadan... - The month of the quran. ramadan. the month of ramadan is the one in which the quran was sent down, a

Ramadan - . by batool anwar. what is ramadan?. ramadan is the ninth month of the islamic calendar. in this month muslims